Caravan are an English band from the Canterbury area, founded by former Wilde Flowers members David Sinclair, Richard Sinclair, Pye Hastings and Richard Coughlan.Caravan rose to success over a period of several years from 1968 onwards into the 1970s as part of the Canterbury scene, blending psychedelic rock and jazz to create a distinctive sound like their contemporaries Soft Machine. The latest 'terror' events in Paris on Friday 13th, November, 2015, have of course, made me recall that piece from all those years ago. You'll note that 10/13 (as seen in the title) is a direct reference to the actual date, Friday 13th, October, 1307, the Templar (Masonic) date of suppression, which occurred in France, the arrest. Well here is the first post of my blog,and the first in the series titled 'Canterbury Anthology'!! Enjoy and stay tuned for more!! Gong-Anthology 1969-1977 (Canterbury Anthology Vol. 1) 01-Riot 71-January 31 Paris, Palais des Sports 02-Pot Head Pixies-November 8,1972 Angers (France) 03-You Can't Kill Me-Live in UK 1974 04-Magik Brother-1969 Demo.

To say that Gong were a peculiar band would really be an understatement. They were originally founded in the late 1960s by ex Soft Machine guitarist Daevid Allen, who for various administrative reasons cited as ‘Visa irregularities’ but which I have always suspected were more to do with Daevid’s Situationist antics during the Paris Student protests of May 1968 which very nearly brought a successful revolution to Western Europe, he was not allowed back into the Mother Country to rejoin his Canterbury chums.

So Daevid went down to Deya in Majorca where he, and partner Gilly Smyth began to assemble a loose-knit collection of musicians who began recording under the name Gong. One of these musicians was Didier Malherbe (latter dubbed Bloomdido Bad-De Grass by Daevid), a tremendously gifted saxophonist and flautist, who Daevid claimed to have found living in a cave on the estate of poet Robert Graves. The rest is history

Daevid, both with and without various versions of Gong, has produced a peerless body of work encompassing folk, jazz, rock and prog (often all of these things and more at once), and his musicianship and compositional skills are legendary.

Put like that it all seems simple, but it was anything but. After releasing You (the third part of the Radio Gnome Invisible saga, and the least silly of the albums to date) Daevid left the band. Whether it was because of personal difficulties, musical differences, or – as he claimed to me many years ago – because one night an enormous psychic force field prevented him going on stage, neither I or anyone else who wasn’t there at the time will ever know.

Daevid went solo, and also teamed up with Here and Now as Planet Gong, and later with the band that would later become Material as New York Gong. Eventually he would reform Gong, but that would be many decades in the future. A few years later Gilli Smyth formed Mother Gong. According to an unsourced quote in Wikipedia “Allen delighted in this proliferation of groups and considered his role at this time to be that of an instigator, travelling around the world leaving active Gong-related bands in his wake.” There may not be a citation there, but that certainly sounds like the Daevid I used to know.

What of the rest of the band? Well, many people believed that the idea of Gong without Daevid was like the Rolling Stones without Keith Richards, but after a stint as Paragong they regrouped as Gong with guitarist Steve Hillage at the helm. The band recorded a new album, but Hillage left before its release. Gilli Smyth and Tim Blake had left at around the same time as Daevid, so the rump of Gong now led by the only surviving founder member Didier Malherbe aka Bloomdido Bad de Grasse, found himself in need of recruiting new members. He brought in noted French percussionist

Piere Moerlen as co-leader, and when de Grasse himself left in 1977, Moerlen was in charge.

The newly instated Pierre Moerlen’s Gong sometimes also known as Expresso Gong made some excellent and innovative records, and – amongst many other things – were responsible for this excellent live album. So it all comes round in circles in the end. JON DOWNES.

Gong's 1970 debut album, Magick Brother featured a psychedelic pop sound. By the following year, the second album, Camembert Electrique, featured the more psychedelic rock/space rock sound with which they would be most associated. Between 1973 and 1974, Gong released their best known work, the allegorical Radio Gnome Invisible trilogy, describing the adventures of Zero the Hero, the Good Witch Yoni and the Pot Head Pixies from the Planet Gong.

In 1975, Allen and Smyth left the band, which continued without them, releasing a series of jazz rock albums under the leadership of drummer Pierre Moerlen. This incarnation soon became known as Pierre Moerlen's Gong. Meanwhile, Smyth formed Mother Gong while Allen initiated a series of spin-off groups, including Planet Gong, New York Gong and Gongmaison, before returning to lead Gong once again in 1990 until his death in 2015. With Allen's encouragement, the band decided to continue, releasing the album Rejoice! I'm Dead! in September 2016. 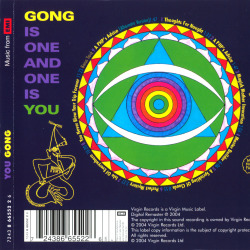