John the Ripper is a fast password cracker, currently available for many flavors of Unix, Windows, DOS, BeOS, and OpenVMS. Its primary purpose is to detect weak Unix passwords. It supports several crypt(3) password hash types commonly found on Unix systems, as well as Windows LM hashes. On top of this, lots of other hashes and ciphers are added in the community-enhanced version (-jumbo), and some are added in John the Ripper Pro.

Release Notes: Incremental mode's efficiency has been improved, andits length and character set limitations indefault builds have been lifted.More speed metrics have been added to the status line.Trivial parallel and distributed processing has been implemented with new --fork and --nodeoptions.Bitmaps have been implemented for faster comparison of computed vs. loaded hashes.Cracking of bcrypt on 32-bit x86 with GCC 4.2+ and DES-based tripcodes has been sped up.Reconstruction of ASCII encodings of LM hashes has been implemented to save RAM.The formats interface has been made more GPU-friendly.Many formats have been renamed.The license has been relaxed.

Release Notes: This is mostly a bugfix release. Besides the many bugfixes (mostly for issues introduced with -jumbo-6), it adds support for cracking of KeePass 2.x and RAdmin 2.x passwords and more varieties of PKZIP archives. It also adds GPU support under recent Mac OS X releases, provides speedups for many of the previously-supported formats, and includes minor new features and documentation updates.

Release Notes: CUDA and OpenCL support has been added. Support for Mac OS X keychains, KeePass 1.x, Password Safe, ODF and Office 2007/2010 files, Firefox/Thunderbird master passwords, RAR -p, WPA-PSK, VNC and SIP C/Rs, HMAC-SHA-*, RACF, builtin SHA-crypt, DragonFly BSD SHA-2, Django, Drupal 7, WoltLab BB3, new EPiServer, GOST, and LinkedIn raw SHA-1 has been added, with OpenMP, CUDA, and/or OpenCL for many of these. Optimizations have been made and OpenMP/CUDA/OpenCL added for many of the previously-supported (non-)hashes. AMD XOP is now used for MD4/MD5/SHA-1. Many main program features and tiny new programs have been added.

Release Notes: -jumbo was rebased on 1.7.9. Support for RADIUS shared secrets and for SHA-0 was added. MSSQL (old and 2005), MySQL (SHA-1 based), and Lotus5 hashing were optimized. OpenMP parallelization was added for Lotus5. x86-64 builds now make use of SSE2 intrinsics for more hash and cipher types. More i-suffixed make targets were added (which use an icc-generated assembly file for SSE2 intrinsics), including for 32-bit x86 builds. An MD4 implementation in assembly for x86/SSE2 and MMX was added. An alternate implementation of NTLM hashing was added (--format=nt2). A binary build for Windows was made.

Release Notes: OpenMP parallelization of MD5-crypt and bitslice DES has been added. DES key setup has been reworked. x86-64 assembly code for DES S-boxes has been optimized. Support for DES-based tripcodes has been added. Larger hash table sizes for faster processing of millions of hashes per salt have been added. Detection of Intel AVX and AMD XOP with fallback to an alternate program binary has been added. Fallback to a non-OpenMP build has been added. A benchmark result comparison tool has been added. The bundled common passwords list has been updated. Many minor enhancements and a few bugfixes were made.

This is the blog where you will see one of the most famous and powerful tool for password cracking which is John the Ripper.

What is John the Ripper?

John the Ripper is the name of the password cracker tool that is developed by Openwall. As the name, It is used to crack password hashes by using its most popular inbuilt program, rules and codes that are also an individual password cracker itself in a single package.

It automatically detects types of password hashes, you can also customize this tool according to your wish. It can be used to crack password-protected compressed files like Zip, Rar, Doc, pdf etc.

What is a Hash Function?

Hashing is the process of converting an input of any length into a fixed-size string of text using the mathematical function (Hash Function) i.e, any text no matter how long it is can be converted into any random combination of numbers and alphabets through an algorithm

Let's understand hashing process with a real-life example. The best example is how our system password stores in the database.

Whenever you set a password it will directly store in the database as a text file that may be read easily if the system compromised. It will save your password in a plain file as the same string you entered. Check the below image with syntax and example

Whenever you set your password it will take your password as an input string and with the help of hashing function, it converts that password into a hash (random combination of number and alphabet) and stores it in the database. It enhances security by encrypting input strings. It will save your password in a different format so no one can read it even if your system compromise.

John the Ripper tool are able to perform various attacks and crack a lot of hash formats such as MD5, SHA1, Adler32, SHA512, MD2 etc.

The main objective of John the Ripper is to crack the password. There are many ways that can be supported but it is mainly known for Dictionary attacks. However, you can also run other types of attacks like Bruteforce attack, Rainbow Table etc.

Dictionary attack: This is the popular and most usable attack in the JTR (John the Ripper) password cracker tool where we used pre-defined words or a list of words that can be used to crack the password. This attack uses the words from the wordlist (A text file having pre-defined words) and matches every single word from the list with a password to crack in sequence.

Que: Do you know why it's called Dictionary attack?

Ans: This attack uses pre-defined words that are present in english dictionary, Hence its name is dictionary attack.

Brute-force attack: If you are using this attack then you have to do the configuration of few things before its use such as the defining minimum and maximum lengths of the password, defining possible characters that you want to test during the cracking process like (special characters, alphabets and numbers).

For Example, The matching string that you are using for cracking passwords should include uppercase alphabets, special characters and numbers like [email protected]$
The user gets a password on the successful match, but this effective process is slow. for example, a 10-character password including upper and lower letters along with numbers and special characters will take over 10 years to be guessed by a computer,

It was developed for Unix Operating systems and was only work on Linux based systems but now available for all platforms such as Windows, BSD, Mac.

In Kali Linux John the Ripper is `already available under password cracking metapackages, so you don't need to download it. If you don't know about Kali Linux and want to install that then you can click on how to install Kali Linux

As I told it already present in Kali Linux that can be executed by opening the terminal and running the john command. Installing JTR binaries on other systems are also easy.

If you are using different Linux distributions like Ubuntu, Fedora, Arch etc. then you can install it by running the below single command the difference in command only will be the package manager i.e, for Ubuntu you use apt, Arch uses Pacman and Redhat uses yum. So replace your desired package manager name in the below command according to your device.

What is John the Ripper Used for?

The penetration testers, ethical hackers, security experts and other Cyber Security professionals use this tool to find weak algorithms and then make them strong so that they can't be hacked.

How to Use John the Ripper

Now we have enough knowledge of the John the Ripper tool and we also installed it. Let's see how we use it.

Using this password cracker tool is very easy and straightforward, you just need to type john followed by the hash file that you want to crack and then just define the format of the hash and hit enter.

In the above picture, you can see lots of supported formats, You can do various things with this tool such as using wordlists, rules, modes, options, decrypting formats etc, We will see below how to use these various things in this tool.

Now in this section, we will learn practically how to use john the ripper password cracker to crack password-protected zip, rar, hash, MD5 and SHA1 files, also we will see how to crack Linux passwords of all users.

Step 1) Now you can see that we have a zip file techofide.zip which is password protected and asking for a password to open it

Step 3) Let's break it with our tool, So now we have a hash of our zip file that we will use to crack the password. In the below command we use the format option to specify the zip file and then the hash.txt file where we store our hash value.

In the above picture, you can see our command complete the session and returns with the correct password 54321

You can crack the rar file with the same command just replace zip with rar.

Step 1) In this example I am generating a hash by using md5 hash generator to show you how to crack MD5 formatted files password. In the below image you can see I have generated the hash of the 12345 string. You can copy the MD5 hash to perform the same practical

Step 2) In the below picture you can see the file sha1.txt. I have used the cat command to show you the data of the sha1.txt file, You can see the MD5 hash value 8772cc...

Step 3) Now let's crack the MD5 Hash, In the below command we have specified format along with the hash file.

In the above screenshot, you can see the output that cracks the hash and returns the 12345 passwords.

Step 1) Cracking SHA1 type of password is the same as MD5 you just need to replace MD5 with SHA1 but here I will also show you how you can use wordlist to perform a dictionary attack with John the Ripper to crack the password.

Note: If you are performing this attack in Kali Linux then you can find wordlists folder i.e, in /usr/share/wordlists/ location, you can see fasttrack.txt, nmap.lst and rockyou.txt. I am using the rockyou.txt file

If you are using a different operating system then you can download this file by clicking on rockyou.txt

Step 2) Use the below command with your hash file to crack it.

In the above picture, you can see it returns the correct password i.e, alejandro. In this command, SHA1 is our hash file and rockyou.txt is our wordlist

Step 1) When we create a password of the Linux system it stores in /etc/shadow location in encrypted form i.e, like a hash. So cracking a Linux password is easy with just a single command that is given below.

In the above image, you can see it decrypt all users passwords i.e, user Kanav's password is kanav123

Remenber if the password is long it will also take long time to crack. We will see more practicals on that in our upcoming blogs.

Thanks for reading this article. 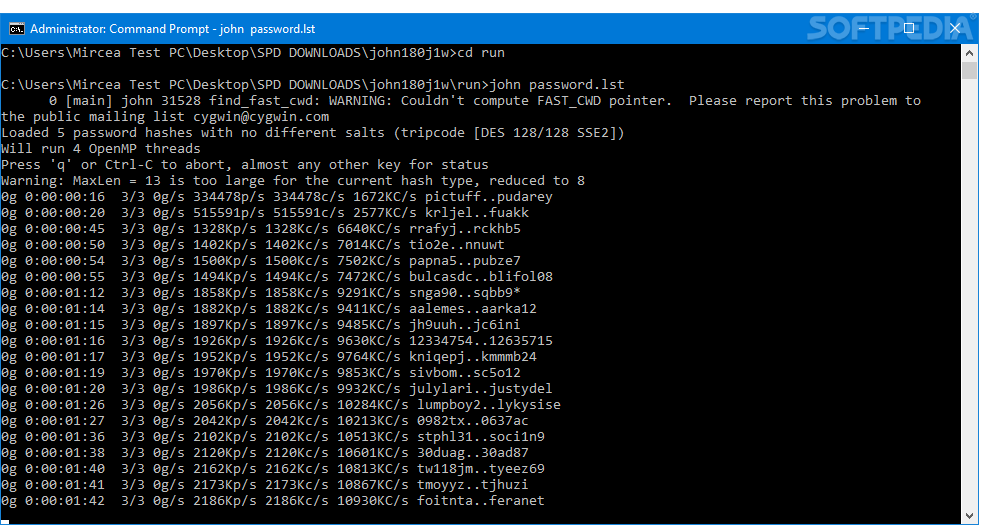